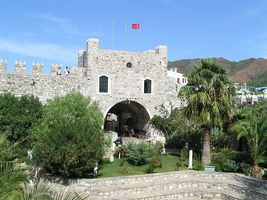 Marmaris Castle is located in Muğla province, Turkey. The castle was reconstructed by Süleyman the Magnificent during his expedition against Rhodes.

The Marmaris Castle is one of the few castles in Turkey that also possesses a museum.

According to Greek historian Herodotus, the first city walls in Marmaris were constructed in 3,000 BC, although the only written source about the construction of the castle by the renowned Ottoman traveler, Evliya Çelebi, in his work Seyahatname.

Çelebi, who visited Muğla and its vicinity in the 17th century, says Sultan Süleyman ordered the construction of the castle before his expedition to Rhodes and that the castle served as a military base during the expedition.

An important part of the castle was destroyed during World War I by a French warship. Until 1979, locals of Marmaris inhabited the castle, which is known to include 18 residences, a fountain and a cistern.

The castle was registered as a monumental structure in 1983 and opened as a museum in 1991.