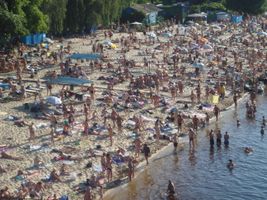 It was created as an entertainment complex with mainly water activities: beaches, boating, water attractions. It is located on Venetian (Ukrainian: Венеціанський) and Dolobetsk (Ukrainian: Долобецький) islands; the Venetian Bridge connects these islands. Venetian island is connected with the rest of Kiev by two bridges: the Metro Bridge to the right-bank city and the Rusanivka bridge to the left-bank city. The Hydropark station of Kiev Metro is located on Venetian island.

Current activities available: number of beaches (including one for children and one for nudes), boat and catamarans rental, ping-pong and tennis, paintball and football, water attractions, restaurants, casino and Sun-City Slavutych disco club (right on the beach), open-air gym (Soviet era heritage) and riverboat excursions.

Island in the Dnieper River. Kiev is endowed with natural city beaches that line Dnieper. Many a summer day can be spent in the parks and on the beaches of the islands, where you can buy shashlyk from stalls, play beach volleyball, swim in the river or in the pools on the island, or just soak up the sun.

It opened on November 5, 1965 as part of the construction of the Brovarsky radius. The station is situated on the Venetsiansky Island right next to Hydropark. Unpopulated and not used for housing, it was transformed by the station into a summer resort for Kievans when it fell in between the future line to Darnytsia and the new Brovary avenue that ran parallel to it.

Such planning is explained in the seasonal operation timetable which make the station rather distinctive. During the summer months it receives quite a moderate passenger traffic, particularly on weekends and public holidays. During the winter months there have been known instances when not a person would get on or off the station for whole weeks. There have even been attempts for the station to be skipped during peak hours.

In its appearance, the station is a typical example of the 1960s policy on Soviet public architecture. In fact, the station demonstrates its fully, minimise costs, simplicity (hence being surface level) and astetic appearance (architects I.Maslenkov and V.Bohdanovsky). A lone grey granite faced platform with a concrete hinged roof is supported by green ceramic tiled pillars. The only decoration that prevents the station from losing its face completely are small ceramic flower motifes on the top of the pillars. Entrances and exits come from two vestibules that are located under the platform and connected with large subways that run underneath the station and the Brovary avenue.

A unique feature of the station is that in addition, it has a second southern platform that would have allowed a quicker unload of passengers from the centrebound areas. However, its use has been discontinued in 1985 and in turn a second, western vestibule was built in 1990. However, during the winter months it is closed and the space is used otherwise.

Kiev in Miniature (Ukrainian: Київ в мініатюрі) is a park of miniatures, situated in Kiev in the area of Hydropark. There are exposed models of Kiev architectural sightseeings, in the scale of 1:33. The park's area is 1.8 hectares. It was opened on 23 June 2006, the closest metro station to it is Hydropark.