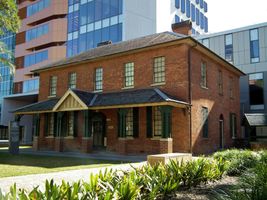 Brislington is a heritage-listed former residence, inn, doctor's surgery, nurses' home and now museum at 10 George Street, Parramatta, Sydney, New South Wales, Australia. It was built from 1819 to 1821 by John Hodge. Incorporated into the former Parramatta District Hospital for many years, it now serves as the Brislington Medical and Nursing Museum. The property is owned by the New South Wales Department of Health. It was added to the New South Wales State Heritage Register on 2 April 1999.

A former residence built in 1821. It is now a museum of the medical and nursing history of Parramatta, with photographs and memorabilia. Opposite stands the Court House Tower all that remains of Parramatta's first court house, built in 1890. There is wheelchair access for the ground floor.