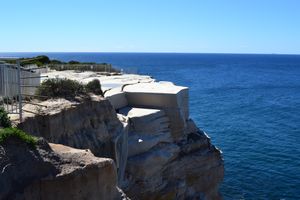 Wedding Cake Rock, also known as White Rock, is a sandstone rock formation located in the Royal National Park near Bundeena, New South Wales, Australia, accessible via the Royal National Park Coast Track. The rock is one of many formations that appear north of Marley Beach, and is suspended 25 metres (82 ft) above sea level. Wedding Cake Rock is noted for its scenic location and popularity with bushwalkers and tourists, as an attractive location for photography. Its reputation, however, was damaged after the landmark saw a sudden spike in popularity in 2015, and subsequently fell victim to vandalism. The rock was closed off from public access in May 2015 by the New South Wales National Parks and Wildlife Service, citing the dangerous behavior of recent visitors, and later, safety concerns, after a survey conducted the following month determined that the rock was unstable, and that it would collapse into the Tasman Sea within the next decade.