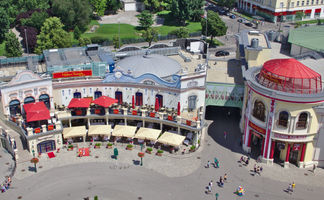 Madame Tussauds Vienna is a wax museum and tourist attraction located at the famous amusement park Wiener Prater in Vienna, Austria. It was founded by Marie Tussaud and is the eleventh location for the Tussauds franchise. It officially opened on April 1st 2011 by the former Austrian president Heinz Fischer. So far, it features more than 80 figures on three floors. Madame Tussauds is now owned and operated by the United Kingdom-based entertainment company Merlin Entertainments.