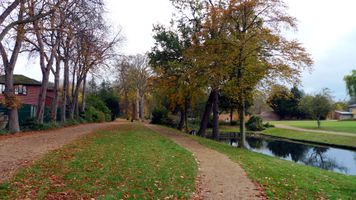 park in the London Borough of Redbridge, UK

Valentines Park is, at 52 hectares (130 acres), the largest green space in the London Borough of Redbridge, situated between Ilford Town Centre and Gants Hill. The district is also eponymous to Valentines District, Ilford. Valentines Park was acquired in various purchases and gifts of land, starting in 1898 and culminating in the 1920s. The Valentines Estate had been in private hands since long before the 1690s, when the present Valentines Mansion was built.

In 1899 the Cranbrook Estate, to the west of Valentines, was about to be sold for housing. The Municipal Borough of Ilford had acquired its first section of parkland a year previously and was keen to enlarge its size as land became available. Local officials realised that, unless an area of "relaxation and pleasure" was retained for the growing urban population, all traces of an undeveloped rural Ilford would be lost. The park was opened in the same year under the name of Central Park. Following the death of the mansion's owner in 1902 the local council acquired the remainder of its grounds and thus expanded the park.

pavilion was completed a year later. The first ever county match with Sunday

play was played here on 15 May 1966 between Essex and Somerset, this proved to be a success with 6000 spectators

attending.Valentines Park has undergone an extensive renovation during 2007–2008 financed by the Heritage Lottery Fund and by the owners, the London Borough of Redbridge. There are a number of Grade II and Grade II* features within the park and part of the formal garden layout of the early 18th century park itself is included in the English Heritage Register of Parks and Gardens of Special Historic Interest in England at Grade II. Brief (English Heritage) listing details for these can be found at Images of England.It is said by Steve Marriott and Tony Robinson ('Baldrick'), best friends at the time, to be the subject of the Small Faces hit, Itchycoo Park, due to being stung by either stinging nettles or wasps.

A pleasant green area, Essex County Cricket team used to play on the pitch in the western side of the park.

Valentines Mansion is situated within Valentines Park in Ilford, Redbridge.