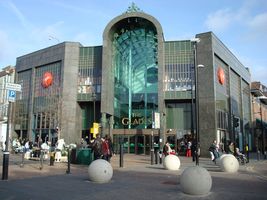 The Glades is a shopping centre in Bromley, south-east London, England. It has a total of 135 stores trading from a combined floorspace of 464,000 sq ft (43,100 m2). Opened as The Glades on Tuesday 22 October 1991, the centre is currently jointly owned by Alaska Permanent Fund (85%) and the London Borough of Bromley (15%). In October 2015 it was confirmed that Alaska Permanent Fund Corporation had agreed to acquire the stakes held by intu Properties and CGNU/Aviva in a £177m deal, giving the APFC 85% holding of the mall (Bromley Council retained its 15% share) and taking the Bromley centre out of intu's network. The sale completed towards the end of 2016.The name "The Glades" was chosen following a competition in which Bromley residents were asked for suggestions. "The Glades" was chosen reflecting the history of Bromley as a wooded area. The centre was rebranded as Intu Bromley in the summer of 2013 following the renaming of parent Capital Shopping Centres Group plc as Intu Properties plc. Following intu Properties' sale of the centre, the intu branding and name was withdrawn from the centre, bringing back its original name.