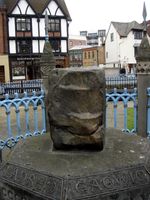 The Coronation Stone is an ancient sarsen stone block which is believed to have been the site of the coronation of seven Anglo-Saxon kings. It is presently located next to the Guildhall in Kingston upon Thames, England. Kingston is now a town in the Royal Borough of Kingston Upon Thames in Greater London, but remains the seat of the administration of the county of Surrey.

In Old English, tun, ton or don meant farmstead or settlement, so the name Kingston appears to mean farmstead of the kings. A local legend that these Saxon coronations gave Kingston its name is contradicted by the records of the 838 council.Æthelstan was consecrated king at Kingston in 925, Eadred in 946 and Æthelred the Unready in 979. There is also some evidence that Edward the Elder, Edmund I, Eadwig and Edward the Martyr were consecrated in the town. According to John Stow, writing in the late sixteenth century, Æthelstan was crowned on a stage in the market place, but it was later believed that the kings were crowned in the ancient church of St Mary, which collapsed in 1730. A large stone block was recovered soon afterwards from the ruins of the chapel, and it has since been regarded as the "Coronation Stone". It was at first used as a mounting block, but in 1850 it was placed in the market place on a plinth which had the names of the seven kings believed to have been crowned on it inscribed around the side.Plans are currently underway to move the stone from the Guildhall to the churchyard of Kingston's old parish church, All Saints Church.

Whilst not full of sights, an item of some interest is the coronation stone, on which seven English kings from Edward the Elder to Aethelred the Unready were crowned. The stone is located outside the Guildhall, and is close to the market.