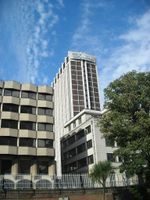 St George's House (sometimes known by locals as the Nestlé Tower) is a 79-metre (259 ft) office tower located in Croydon, United Kingdom. It was occupied by the Swiss multinational food and consumer goods company Nestlé as the headquarters of Nestlé UK & Ireland until September 2012.

The famous UK headquarters of Nestlé, one of the tallest towers in England.