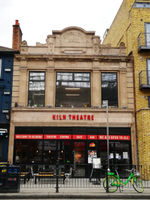 The Kiln Theatre (formerly the Tricycle Theatre) is a theatre located in Kilburn, in the London Borough of Brent, England. Since 1980, the theatre has presented a wide range of plays reflecting the cultural diversity of the area, as well as new writing, political work and verbatim reconstructions of public inquiries.

The current artistic director is Indhu Rubasingham, who succeeded Nicolas Kent in 2012. The theatre's name was changed from the Tricycle to the Kiln in April 2018.