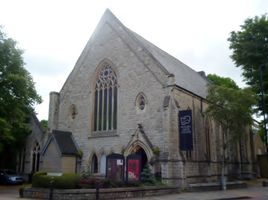 Putney Arts Theatre ("PAT") is based in Putney, in the London Borough of Wandsworth and operates as a community space specialising in theatre productions.

The Putney Arts Theatre stands in the Union Chapel built by Sir Samuel Morton Peto in the late 19th century. After the original congregation fell dissolved, the London City Council acquired the building.

In 1968, the theatre troupe Group 64 leased the Union Chapel in Putney from the London City Council. Group 64 purchased the building in 1998 and renamed it the Putney Arts Theatre. The opening production was attended by Sir John Mills, a patron of the theatre.Group 64 Youth Theatre is the resident Youth Theatre Group, and Putney Theatre Company is the resident Adult Theatre Group.

Comes recommended for anyone interested in anything to do with theatre. They run drama courses for adults and children and around eight shows a year are produced by adults and children alike. Putney Theatre company offers opportunities for anyone interested in any type of theater work from acting to writing to set design. Group 64 is the youth drama group for kids, they run weekly classes, holiday projects but also put together shows.