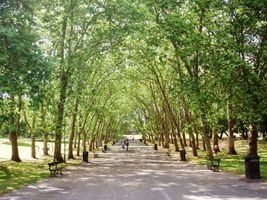 Crystal Palace Park is a Victorian pleasure ground, used for cultural and sporting events. It is located in the south-east London suburb of Crystal Palace, which was in turn named after the Crystal Palace Exhibition building, which had been moved from Hyde Park, London after the 1851 Great Exhibition and rebuilt with some modifications and enlargements to form the centrepiece of the pleasure ground, before being destroyed by fire in 1936. The park features full-scale models of dinosaurs in a landscape, a maze, lakes, and a concert bowl.This site contains the National Sports Centre, previously a football stadium that hosted the FA Cup Final from 1895 to 1914 as well as Crystal Palace F.C.'s matches from their formation in 1905 until the club was forced to relocate during the First World War. The London County Cricket Club also played matches at Crystal Palace Park Cricket Ground from 1900 to 1908, when they folded, and the cricket ground staged a number of other first-class cricket matches and had first been used by Kent County Cricket Club as a first-class venue in 1864.

The park is situated halfway along the Norwood Ridge at one of its highest points. This ridge offers views northward to central London, eastward to the Queen Elizabeth II Bridge and Greenwich, and southward to Croydon and the North Downs. The park remains a major London public park. The park was maintained by the LCC and later the GLC, but with the abolition of the GLC in 1986, control of the park was given to the London Borough of Bromley, so the park is now entirely within the London Borough of Bromley.

The park is Grade II* listed on the Register of Historic Parks and Gardens.

While the Crystal Palace is no longer there, the 200-acre park is a lasting reminder of the grandeur of the scheme. There is a wide range of things to see and do, including a hedge maze, a sports centre with Olympic-sized pool, a boating lake, fishing, an athletics stadium and an open air concert bowl by a lake among other things. The park is a great place for a walk and also for cycling around. A significant attraction within the park is the Dinosaur Park. Large Victorian concrete and cast iron dinosaurs are scattered around widely. The dinosaurs, built by Benjamin Waterhouse Hawkins in the early 1850s to meet the emerging passion of wealthy Victorians for fossils and paleontology, they predated Charles Darwin's On the Origin of Species by six years and were unique in the world. After falling into a state of disrepair in the 1980s and 1990s, they were splendidly renovated using a Lottery grant in the early 2000s and are now protected as a grade I listed structure. The dinosaurs were designed by the Victorians on their idea of what one would look like and differ somewhat from modern interpretations.