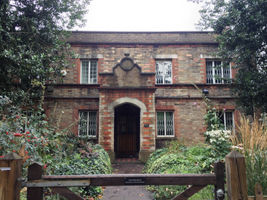 Kennington Park is a public park in Kennington, south London and lies between Kennington Park Road and St. Agnes Place. It was opened in 1854 on the site of what had been Kennington Common, where the Chartists gathered for their biggest "monster rally" on 10 April 1848. Soon after this demonstration the common was enclosed and, sponsored by the royal family, made into a public park.

Kennington Common was a site of public executions until 1800 as well as being an area for public speaking. Some of the most illustrious orators to speak here were Methodist founders George Whitefield and John Wesley who is reputed to have attracted a crowd of 30,000.

The common was one of the earliest London cricket venues and is known to have been used for top-class matches in 1724. Kennington Park hosts the first inner London community cricket ground, sponsored by Surrey County Cricket Club whose home, The Oval, is close to the park. Casual games of both cricket and football are regularly held in the park.

In the 1970s, the old tradition of mass gatherings returned to the park which was host to the start of many significant marches to Parliament. Today, a number of commercial and community events are held in the park each year and recently the Flower Garden was restored with a Heritage Lottery grant. The Friends of Kennington Park, FoKP, was founded in 2002 and provides a local forum for park issues as well as fundraising for improvements.