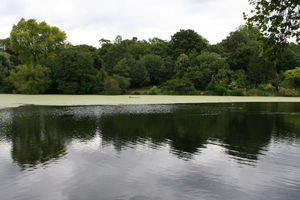 Hampstead Heath has some thirty ponds on or adjacent to it. The main Hampstead Heath Ponds were originally dug in the 17th and 18th centuries as reservoirs to meet London's growing water demand. These main ponds are divided in to two groups: the three Hampstead Ponds (West Heath Side) and the eight Highgate Ponds (East Heath Side). Both sets of ponds are officially numbered incrementally from South to North, the southernmost pond being Hampstead #1 pond and the northernmost being Highgate #8 (Kenwood House’s Wood Pond).

The majority of the ponds on Hampstead Heath are fed by the headwater springs of the River Fleet. Three of the main ponds are now large freshwater bathing/swimming ponds: two designated single sex (male/female Highgate #2 & Highgate #5 respectively); and one for mixed bathing (Hampstead #3). The bathing ponds aren’t the only special-use ponds however, Highgate #3 pond is the Model Boating Pond and it, along with a few other ponds, are open to anglers. A number of the other ponds are set-aside as wildlife reserves or are purely ornamental (such as the more minor Viaduct Pond).

In 2004, the City of London Corporation, which holds the Heath in trust since the abolition of the Greater London Council in 1986, tried to close the bathing ponds on the grounds that they were an unsustainable drain on their expenses and posed a health risk to swimmers. The swimmers challenged this and won a victory in the High Court. To defray costs, the Corporation introduced a charge for admission of £2 per session, £1 for concessions. There was some opposition to this on the grounds that swimming there had been free since at least the 1920s, and some ticket machines were vandalised.

There are three notable outdoor bathing ponds on the heath. The Men's Pond and Women's Pond are both part of the line of small lakes on the eastern edge of the heath known as Highgate Ponds, and the Mixed Pond is part of Hampstead Ponds on the opposite side. Swimming hours are seasonal, complicated, age-dependent and change frequently, so it is worth checking before making a special trip.