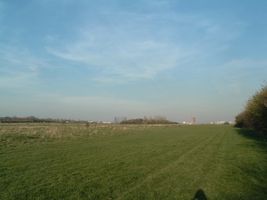 Wormwood Scrubs, known locally as The Scrubs (or simply Scrubs), is an open space in Old Oak Common located in the north-eastern corner of the London Borough of Hammersmith and Fulham in west London. It is the largest open space in the Borough, at 80 ha (200 acres), and one of the largest areas of common in London. The eastern part, known as Little Wormwood Scrubs, is cut off by Scrubs Lane and the West London Line railway. It has been an open public space since the Wormwood Scrubs Act of 1879.

The southern edge of the Scrubs is the site of two locally important buildings. At the western end is HM Prison Wormwood Scrubs, built between 1875 and 1891 by convict labour. To the east of the prison is the Hammersmith Hospital campus, which includes the relocated Queen Charlotte's and Chelsea Hospital.

Within the area are several sports facilities, including the Linford Christie stadium, tens of football pitches and a pony centre. Queens Park Rangers Football Club played on Wormwood Scrubs between 1893 and 1896.