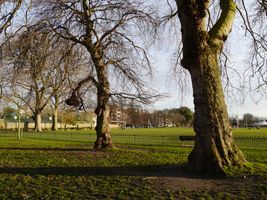 Hurlingham Park is a park and multi-use sports ground in Fulham, London, England. It is currently used mostly for rugby matches, football matches and athletics events and is the home of Hammersmith and Fulham Rugby Football Club.

The park served as the location for Monty Python's Upper Class Twit of the Year sketch. The venue opened in 1879, the same year as Fulham F.C. were established, who are thought to have played here when they were still a boys' church side. It had a seated capacity of around 2,500 people, until the stands were demolished in 2002.