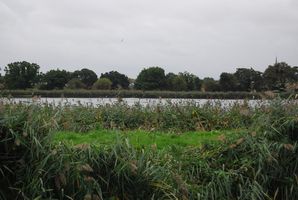 nature reserve in the United Kingdom

Woodberry Wetlands is a nature reserve and designated Site of Metropolitan Importance on the site of the East Reservoir in Stoke Newington, Hackney, London. The site opened to the public for the first time in 200 years on 1 May 2016. Covering 4.5 ha (11 acres) and situated close to the Lee Valley, Woodberry Wetlands was acquired as a nature reserve in 2014. The site is owned by Thames Water and run by London Wildlife Trust.

After a major redevelopment the East Reservoir now offers free public access. The reserve was developed by London Wildlife Trust in collaboration with Thames Water, Berkeley Homes and London Borough of Hackney, with funding from Heritage Lottery Fund. The site contains a boardwalk, a visitors' centre with café, toilet facilities and a classroom. The New River Path runs alongside the northern edge of the reservoir. This forms part of a cycle route connecting to Walthamstow Wetlands, badged as the 'Wetlands to Wetlands Greenway'.

Two former Thames Water reservoirs which are now managed as a nature reserve in urban Hackney by the London Wildlife Trust. Has a small visitor centre.