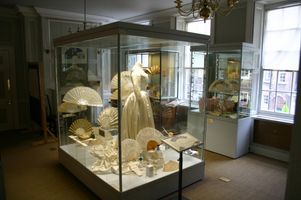 The Fan Museum, which opened in 1991, is the world's first museum dedicated to the preservation and display of fans. It is located within two grade II* listed houses built in 1721 in the Greenwich World Heritage Site in southeast London, England. Along with the museum, there is an orangery decorated with murals, a Japanese-style garden with a fan-shaped parterre, a pond and a stream.

The museum owns over 4,000 fans, fan leaves, and related ephemera. The oldest fan in the collection dates from the 10th century, and the collection of 18th and 19th century European fans is extensive. The entire collection is not displayed permanently due to conservation concerns, so three times a year the selection of fans on exhibit is changed. There is also a permanent educational display which teaches about fan history, manufacturing processes, and the various forms of fan.

The museum operates a conservation unit which undertakes specialist work for other museums and also for the public. New fans are also made at the museum, and fan-making classes are held. The Fan Museum also contains a reference library.

Operated by an independent charitable trust, the museum has received financial support from the London Tourist Board, English Heritage, the National Art Collections Fund, the Foundation for Sports and the Arts, The Heritage of London Trust and the Heritage Lottery Fund, and from many corporate and individual supporters. National Trust members receive a discount on admission.

Exhibits include a fan with a built-in ear trumpet and one with a repair kit built into the design.

The world's largest fan museum, for those who are big fans of fans.