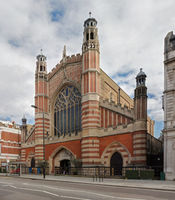 church in Royal Borough of Kensington and Chelsea, UK

Holy Trinity Sloane Street (The Church of the Holy and Undivided Trinity with Saint Jude, Upper Chelsea, sometimes known as Holy Trinity Sloane Square) is a London Anglican parish church. It was built in 1888–90 at the south-eastern side of Sloane Street, to a striking Arts and Crafts design, by the architect John Dando Sedding, and paid for by 5th Earl Cadogan, in whose London estate it lay. It replaced an earlier building only half its size which, at the time of its demolition, was less than 60 years old.

From their website: "In common with the aims of the Arts & Crafts Movement, the architect of Holy Trinity Church, John Dando Sedding, believed that a church should be 'wrought and painted over with everything that has life and beauty—in frank and fearless naturalism.'" Naturalism or not, the church is known as an ornate building.