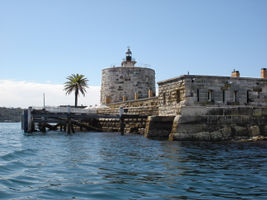 Building detailsFort Denison, part of the Sydney Harbour National Park, is a protected national park that is a heritage-listed former penal site and defensive facility occupying a small island located north-east of the Royal Botanic Gardens and approximately 1 kilometre (0.62 mi) east of the Opera House in Sydney Harbour, New South Wales, Australia. The island was formerly known in its indigenous name of Mat-te-wan-ye, and as Pinchgut Island.

The site contains time gun, navigational aids and tide gauge facilities. Correctional and military facilities were designed by George Barney and built from 1840 to 1862 by William Randle. The property is owned by the NSW Office of Environment and Heritage, an agency of the Government of New South Wales. It was added to the New South Wales State Heritage Register on 2 April 1999. In 1978 the former fortress was listed on the (now defunct) Register of the National Estate, and is currently used as a national park, nature reserve, tourist facility, and as a function space.