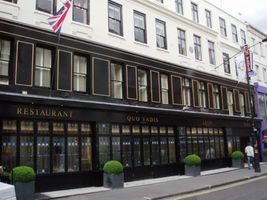 Quo Vadis is a restaurant and private club in Soho, London. It primarily serves modern British food. It was founded in 1926 by an Italian named Peppino Leoni and has passed through numerous owners since then, including the chef Marco Pierre White, and is currently owned by Sam and Eddie Hart, also the owners of Barrafina. The restaurant is named after the Latin phrase Quo vadis?, meaning "Where are you going?"

Bit of a Soho institution that used to be owned by Marco Pierre White. Now under new management but little has changed. Top notch British grill style food in a very smart environment.