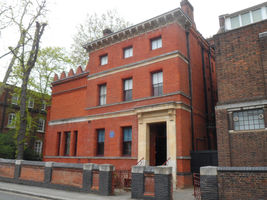 The Leighton House Museum is an art museum in the Holland Park area of the Royal Borough of Kensington and Chelsea in west London.

The building was the London home of painter Frederic Leighton, 1st Baron Leighton (1830–1896), who commissioned the architect and designer George Aitchison to build him a combined home and studio noted for its incorporation of tiles and other elements purchased in the Near East to build a magnificent Qa'a (room). The resulting building, completed 1866–95, on the privately owned Ilchester Estate, is now Grade II* listed. It is noted for its elaborate Orientalist and aesthetic interiors.

The former Victorian home of an artist Frederic (Lord) Leighton. While regarded as one of the finest examples of Victorian residential architecture, it's not the usual Neo-Gothic venue. The entrance rooms, especially the so-called Arabic Hall, look like an eclectic cross-breed between the Alhambra and Topkapı Palace. This may sound quite terrible, but surprisingly it works. While the rest of the building is less vividly decorated it's still designed rather well and displays some works by Lord Leighton himself and his fellow Pre-Raphaelites, but also a handful of works by Delacroix and Corot as well as a collection of some colourful pottery. Regular small exhibitions are held in the house's extension.