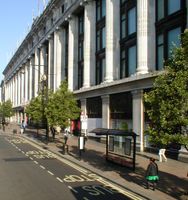 Worth a visit for its food hall; it also has a great selection of bottled beers.