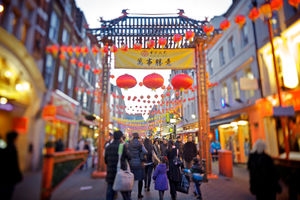 neighborhood in the City of Westminster, London

Chinatown is an ethnic enclave in the City of Westminster, London, bordering Soho to its north and west, Theatreland to the south and east. The enclave currently occupies the area in and around Gerrard Street. It contains a number of Chinese restaurants, bakeries, supermarkets, souvenir shops, and other Chinese-run businesses. The first Chinatown was located in Limehouse in the East End.

The main sights to see in London's Chinatown are the expressions of Chinese culture and Eastern ambience in Chinatown, and for a good Chinese meal. There are few souvenir shops for tourists and no museums or temples.

The statue of Charlie Chaplin in Leicester Square, London, is a work of 1979 by the sculptor John Doubleday. It portrays the actor, comedian and filmmaker in his best-known role, as The Tramp.

A memorial to Chaplin in the city of his birth was proposed on 25 December 1977, soon after Chaplin's death, by Illtyd Harrington, the leader of the opposition in the Greater London Council. Initial plans for a memorial in the Elephant and Castle, in South London where Chaplin spent his early years, were dropped and instead Leicester Square, at the centre of London's entertainment district, became the preferred location for the work.The bronze statue was first unveiled on 16 April 1981 (the 92nd anniversary of Chaplin's birth) at its original site, on the south-western corner of the square, by the actor Sir Ralph Richardson. An inscription on the plinth read THE COMIC GENIUS/ WHO GAVE PLEASURE/ TO SO MANY. The following year a slightly modified version was erected in the Swiss town of Vevey, which had been Chaplin's home from 1952 until his death. Following a refurbishment of Leicester Square in 1989–1992, the statue was moved to a site north of the statue of William Shakespeare, the square's centrepiece.In a later refurbishment of 2010–2012 Chaplin's statue was removed altogether, together with busts of William Hogarth, John Hunter, Sir Isaac Newton and Sir Joshua Reynolds. The statue was installed in a nearby street, Leicester Place, in 2013. This was in order to prevent damage to the sculpture during improvement works. In 2016 it returned to Leicester Square and was re-unveiled on Chaplin's birthday.

The Brain was a house and techno music venue in Soho, London. It was located on the former premises of the Apollo Club on 11 Wardour Street. The Brain was founded in 1989 by Sean McLusky and Mark 'Wigan' Williams. Several now famous DJs and producers played at the club, including Norman Cook, Orbital, Leftfield, Billy Nasty, Goldie, Moby, Graeme Park, The Shamen, Mixmaster Morris, Ariel, Andrew Weatherall, and A Guy Called Gerald. At the time there was little actual live performance on the techno scene (this would change later with the advent of raves). The Brain encouraged live sets and P.As at a time when only mainstream house music used vocals on tracks.

In the early and mid-1990s Sean McLusky masterminded various seminal London clubs and venues including; Love Ranch at Maximus with Mark Wigan, Club UK, The Scala (club) in King's Cross, and the multi-faceted Sonic Mook Experiment.

The Prince Charles Cinema (PCC) is a repertory cinema located in Leicester Place, 40 metres north of Leicester Square in the West End of London. It shows a rotating programme of cult, arthouse, and classic films alongside recent Hollywood releases – typically more than ten different films a week on two screens (300 velvet seats downstairs and 104 high back leather seats upstairs). It also hosts the sing-a-long version of The Sound of Music, which has been shown on a regular basis for over five years, as well as The Rocky Horror Picture Show, Joseph and The Room. The cinema has achieved a cult status amongst fans, sticking out as the only independent cinema in the West End.

The Shaftesbury Theatre was a theatre in central London, England, between 1888 and 1941. It was built by John Lancaster for his wife, Ellen Wallis, a well-known Shakespearean actress. The theatre was designed by C. J. Phipps and built by Messrs. Patman and Fotheringham at a cost of £20,000 and opened with a production of As You Like It on 20 October 1888.

The theatre had a stage of 28' 6" square. The capacity was 1,196. It was located on the south side of Shaftesbury Avenue, just east of Gerrard Place.

The 43 Club or "The 43" was a nightclub at 43 Gerrard Street in Soho, London that became notorious during the roaring twenties for outrageous parties frequented by the decadent rich and famous. Local myth provides many tales of provocative, licentious and sometimes criminal goings on. The proprietor, Kate Meyrick, was eventually gaoled five times before the club finally closed. Occasionally modern nightclub ventures in London and elsewhere call themselves "Club 43" and other variations of the name in honour of this infamous 1920s venue.

The Flamingo Club was a nightclub in Soho, London, between 1952 and 1969. It was located at 33–37 Wardour Street from 1957 onwards and played an important role in the development of British rhythm and blues and jazz. During the 1960s, the Flamingo was one of the first clubs to employ fully amplified stage sound and used sound systems provided by ska musicians from the Caribbean. The club had a wide social appeal and was a favourite haunt for musicians, including the Beatles.

St John's Hospital for Diseases of the Skin