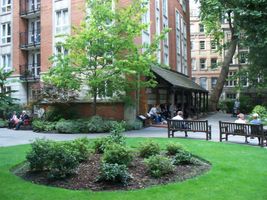 Postman's Park is a public garden in central London, a short distance north of St Paul's Cathedral. Bordered by Little Britain, Aldersgate Street, St. Martin's Le Grand, King Edward Street, and the site of the former headquarters of the General Post Office (GPO), it is one of the largest open spaces in the City of London.Postman's Park opened in 1880 on the site of the former churchyard and burial ground of St Botolph's Aldersgate church and expanded over the next 20 years to incorporate the adjacent burial grounds of Christ Church Greyfriars and St Leonard, Foster Lane, together with the site of housing demolished during the widening of Little Britain in 1880; the ownership of the last location became the subject of a lengthy dispute between the church authorities, the General Post Office, the Treasury, and the City Parochial Foundation. A shortage of space for burials in London meant that corpses were often laid on the ground and covered over with soil, thus elevating the park above the streets which surround it.

In 1900, the park became the location for George Frederic Watts's Memorial to Heroic Self-Sacrifice, a memorial to ordinary people who died while saving the lives of others and who might otherwise be forgotten, in the form of a loggia and long wall housing ceramic memorial tablets. Only four of the planned 120 memorial tablets were in place at the time of its opening, with a further nine tablets added during Watts's lifetime. Watts's wife, Mary Watts, took over the management of the project after Watts's death in 1904 and oversaw the installation of a further 35 memorial tablets in the following four years along with a small monument to Watts. Later she became disillusioned with the new tile manufacturer and, with her time and money increasingly occupied by the running of the Watts Gallery, she lost interest in the project, and only five further tablets were added during her lifetime.

In 1972, key elements of the park, including the Memorial to Heroic Self-Sacrifice, were grade II listed to preserve their character, upgraded to Grade II* in 2018. Following the 2004 film Closer, based on the 1997 play Closer by Patrick Marber, Postman's Park experienced a resurgence of interest; key scenes of both were set in the park itself. In June 2009, a city worker, Jane Shaka (née Michele), via the Diocese of London added a new tablet to the Memorial, the first new addition for 78 years. In November 2013 a free mobile app, The Everyday Heroes of Postman’s Park, was launched which documents the lives and deaths of those commemorated on the memorial.

Postman's Park is three parks combined, bringing together the gardens of St Botolph's Aldersgate, Christ Church Greyfriars and St Leonard, Foster Lane. One of the largest parks in the City of London, Postman's Park contains the Memorial to Heroic Self Sacrifice; a memorial to ordinary people who died saving the lives of others and might otherwise have been forgotten.