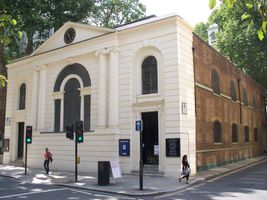 church in City of London, UK

St Botolph without Aldersgate (also known as St Botolph's, Aldersgate) is a Church of England church in London dedicated to St Botolph. It was built just outside Aldersgate; one of the gates on London's wall in the City of London.

The church, located on Aldersgate Street, is of medieval origin. The church survived the Great Fire of London with only minor damage but subsequently fell into disrepair and was rebuilt in 1788–91. The church is renowned for its beautiful interior and historic organ. It is currently used by the London City Presbyterian Church, a congregation of the Free Church of Scotland.

A medieval church that was rebuilt in the late 18th-century, noted for its well preserved interior. The former churchyard was converted into a public space in 1880, called Postman's Park as it was frequented by workers from the nearby Post Office headquarters.