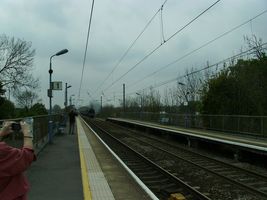 Diss railway station is on the Great Eastern Main Line in the East of England, serving the town of Diss, Norfolk. It is 94 miles 43 chains (152.1 km) down the line from London Liverpool Street and is situated between Stowmarket to the south and Norwich to the north. It is approximately 20 miles (32 km) south of Norwich. Its three-letter station code is DIS.

The station is currently operated by Greater Anglia, who also operate all trains serving it, as part of the East Anglia franchise.