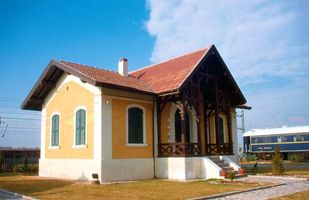 The Railway Museum of Thessaloniki is a museum in Eleftherio-Kordelio, a municipality of the city of Thessaloniki, Central Macedonia, Greece. It was founded in 2001 and is housed in the old Military Railway Station A (French: Gare Militaire) of the Thessaloniki-Constantinople Railway (French: Jonction Salonique-Constantinople), near the current TX-3 signalbox. This historic station was built in 1891–1894 by the Italian architect Pierro Arigoni.

In the station-master’s office inside the station building there is a map with all Greek railway lines marked on it, railway workers’ uniforms, railway workmen’s tools, personal belongings, technical manuals and details of all old steam engines and diesel engines belonging to the Greek railways. The museum is also home to some of the furnishings from the carriages of the former Greek royal family. In the museum courtyard there is a restaurant carriage from the renowned Orient Express, which is open to visitors.

There are plans to put fifteen old OSE engines on display in front of the museum; these engines are at present undergoing reconstruction work. As from the summer of 2002 young friends of the railway can travel to the museum on the children’s train which departs from the new railway station of Thessaloniki.

The museum is open every Wednesday and Thursday between 10am and 13am, excluding public holidays. Photography is allowed only by advance arrangement.