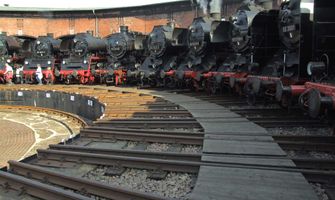 The Saxon Railway Museum (Sächsisches Eisenbahnmuseum or SEM) is located in Chemnitz, in the state of Saxony, eastern Germany. It is situated on the site of the former locomotive depot (Bahnbetriebswerk or Bw) for goods train locomotives in the district Hilbersdorf.

After the locomotive depot was closed in 1992, the society moved into the buildings which were protected as historical monuments. As a result, the museum has two roundhouses with 20-metre (66 ft) turntables. In addition there are coaling and sanding facilities, water cranes, a working jack for inspection pits and a range of other equipment found in an operational depot.

The exhibition area describes and portrays the evolution of the railway in Saxony and especially in the area of Chemnitz. In addition to an extensive range of steam, diesel and electric locomotives, the museum also has a large collection of operational, narrow-gauge, Feldbahn engines.

Many of the locomotives on show are loaned from private individuals, from the Dresden Transport Museum or the Nuremberg Transport Museum. As a result, the museum's collection includes the following:

DRG Class E 44 electric locomotive, no. E 44 045.Special vehicles in the museum's fleet include a Tatra T141 tractor with a Culemeyer heavy trailer.

There is also a working DRG Class 50 steam locomotive, no. 50 3648, that is regularly used for special trips. At the end of August each year there is a large festival (Heizhausfest) with a parade of locomotives.