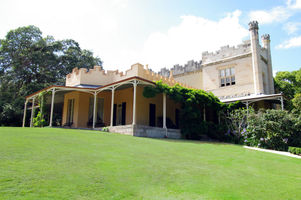 Vaucluse House is a heritage-listed former Aboriginal land, residence, colonial farm and country estate and now tourist attraction, house museum and public park located at 69a Wentworth Road, Vaucluse in the Municipality of Woollahra local government area of New South Wales, Australia. Completed between 1803 and 1839 in the Gothic Revival style, its design was attributed to William Charles Wentworth and built by Sir Henry Browne Hayes and W. C. Wentworth. The property is owned by the Historic Houses Trust of New South Wales, an agency of the Government of New South Wales. The site was added to the New South Wales State Heritage Register on 2 April 1999.Vaucluse House is a 19th-century estate with house, kitchen wing, stables and outbuildings, surrounded by 11 hectares (28 acres) of formal gardens and grounds located on the south-eastern shores of Port Jackson. The house is one of the few 19th-century houses near Sydney Harbour retaining a significant part of its original setting.The property was listed on the New South Wales State Heritage Register on 2 April 1999 with the following statement of significance:

Today Vaucluse House is one of the few 19th century houses on Sydney Harbour retaining a significant part of its original estate setting. One distinguishing surviving characteristic of the 19th century estate is its careful division into specific areas, both functional and ornamental, such as pleasure garden, kitchen garden, rear service yard, paddocks, carriageway, creek, estate backdrop, beach paddock.

Vaucluse House is significant because of its association with the Wentworth family and their aspirations. It has a large collection of surviving original documentary evidence relating to the house, its contents and occupants. There are a number of extant buildings and gardens and the house retains relative intactness of form, interior space and detailing predating 1900.

A large early Victorian garden and shrubbery, laid out to compliment a gothic revival house belonging to the family of the important colonial pioneer and politician W.C. Wentworth. There appears little early documentation of the garden but it can be presumed to have been designed to complement the mid-19th Century additions to the house and to have been established by the 1860s.