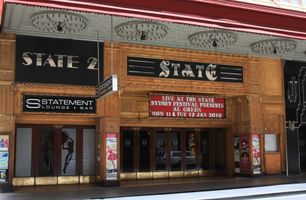 The State Theatre is a heritage-listed theatre, located at 47-51 Market Street, in the Sydney central business district in the City of Sydney local government area of New South Wales, Australia. The theatre was designed by Henry Eli White and built from 1926 to 1929. It hosts film screenings, live theatre and musical performances, and since 1974 it has been the home of the annual Sydney Film Festival. It is also known as State Building and Wurlitzer Organ. The property is privately owned. It was added to the New South Wales State Heritage Register on 2 April 1999.