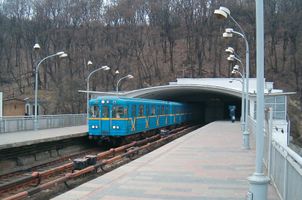 Dnipro (Ukrainian: Дніпро) is a station on the Kiev Metro's Sviatoshynsko-Brovarska Line. Named after the Dnieper River, the station consists of a semi-estacade over the embankment highway, and then continues across the river as part of Kiev Metro Bridge. The station was opened along with the first stage of the Metro in 1960 and for the first five years, before the bridge was completed, was the eastern terminus of the line.

Itself, the station is probably one of the most distinctive designs in not only Kiev, but all of the former USSR. The design is attributed to Kiev's unique geography and how engineers and city planners applied the Metro development project to it. The goal was to link Kiev-Pasazhyrskyi railway station via the city centre to the residential districts on the left bank of the river. Since the planned junction between the Brovary avenue and the right bank was to happen at that point, it was decided to turn the metro line first southeast via the Arsenal factory and then make a right angle turn northeast and make the Brovarsky radius go on the surface similar in design to Moscow's Filyovskaya Line. The station was to serve this junction point.

In engineering terms, the design incorporates two distinct portions: a large structure on the western side with estacade track and platforms coming out. Both the engineers (H.Fuks, L.Nobsborsky and V.Ihnatyuk) and the architects (H.Hranatkin, A.Ihnashchenko, P.Krasytsky and S.Krushynsky) put quite an effort into its construction. The western side structure consists of an embankment level vestibule with ticket halls and staircases leading on to the platforms. Although the station has side platforms, it is possible to change direction without leaving the premises of the station.

The estacade level consists of two platforms separated by double track. Originally, when the Brovarsky radius was not completed, the far end of the platform was a large balcony overlooking the river and one of the tracks was covered up by the platform. On the side of the embankment, there are two additional glazed staircase pavilions which are currently closed. On top of them are two statues of Young Pioneers by the sculptors F.Katsyubynsky, E.Kuntsevych, I.Horovy, B.Karlovsky. The statues were erected in 1965 as part of the construction of Metro Bridge. The northern statue is of a girl releasing pigeons whilst the southern one is of a boy releasing a model of the Sputnik satellite. This has since often symbolised the station as a gateway to the future of the Soviet Union: peace and technological achievement.

Also interesting is that under the station pass the lines of the Kiev tram, originally there was depot there, but in 1960, when the Metro was opened, it lacked a full depot for serious repairs and the tram depot was converted into a Metro one. Tram tracks were used for rail cars and these were pushed onto a rotor which spun them 90 degrees before hydraulically lifting them up onto the estacade. Although this unique operation was time consuming, it was nevertheless rarely used as a service bay behind Arsenalna was suitable in most cases. In 1965 after the extension to the left bank, the Darnytsia depot was opened, and both the provisional depot and the rotor/lift were dismantled. (See pre-1965 layout of the station and video of its operation.)

Today the station, although having a short passenger traffic, remains the most popular in Kiev Metro. Most of the people who actually come off there are visitors to the city that are amazed at the construction of this remarkable 40-year-old design. Over the years, its exposure to the elements have necessitated in some repair work and renovation which is periodically carried out. The station also remains symbolic in other ways, as it was on the hill of the right bank, where the current portal tunnels are that in 1949 the first tunnel boring shield was launched.