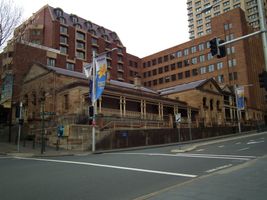 The Justice and Police Museum is a heritage-listed former water police station, offices and courthouse and now justice and police museum located at 4-8 Phillip Street on the corner of Albert Street, in the Sydney central business district in the City of Sydney local government area of New South Wales, Australia. It was designed by Edmund Blacket, Alexander Dawson and James Barnet and built from 1854 to 1886. It is also known as Police Station & Law Courts (former) and Traffic Court. The property is owned by the Department of Justice, a department of the Government of New South Wales. It was added to the New South Wales State Heritage Register on 2 April 1999.