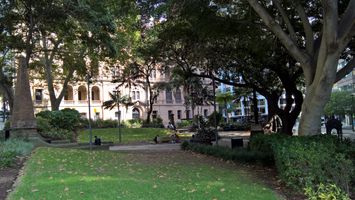 The Macquarie Place Park, also known as the Macquarie Place Precinct, is a heritage-listed small triangular urban park located in the Sydney central business district in the City of Sydney local government area of New South Wales, Australia. The former town square and milestone and now memorial, public park and monument is situated on the corner of Bridge Street and Loftus Street. It is named in honour of Governor Lachlan Macquarie. The precinct includes The Obelisk or Macquarie Obelisk, the Sirius anchor and gun/cannon, the Statue of Thomas Sutcliffe Mort, the historic Underground Public Conveniences and the Christie Wright Memorial Fountain. The property was added to the New South Wales State Heritage Register on 5 March 2010.Macquarie Place was the first formally laid out public space in Sydney in 1810, functioning as the town square. Along with Hyde Park, it is the oldest public park in Australia. Its size has been greatly reduced since colonial days. An obelisk from 1818 and designed by the New South Wales Government Architect, Francis Greenway, is located in the park and records the distance to various locations in New South Wales along the earliest roads developed in the colony. Later an anchor from the Norfolk Island wreckage of the First Fleet flagship, HMS Sirius, together with a cannon from the ship, were placed in the park. The Great North Walk to Newcastle southern terminus is at the obelisk in Macquarie Place.

Many important institutions have had establishments at Macquarie Place. In 1817 Australia's first bank, the Bank of New South Wales (later to become Westpac in 1982) opened in Macquarie Place. The State Library of New South Wales briefly had premises in the place during the 1830s. Opposite the place in Bridge Street is the original Department of Lands building, which was the department responsible for surveying and mapping New South Wales.In 1883 a statue of early Australian industrialist, Thomas Mort was unveiled in the park. In 1954 Queen Elizabeth II and the Duke of Edinburgh marked the beginning of the Remembrance Driveway by planting two plane trees in Macquarie Place.