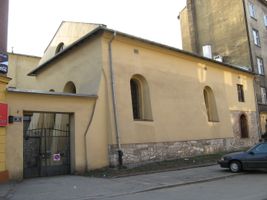 This is a sub-article to Synagogues of Kraków

The Wolf Popper Synagogue (Polish: Synagoga Poppera (Bociana)), located in Kraków, Poland, used to be one of the most splendid Jewish houses of prayer in the old Jewish quarter of Kazimierz established in a suburb earmarked in 1495 by King Jan I Olbracht. The Synagogue was founded by Wolf "The Stork" Popper in early 17th century. Its entrance was once adorned with openwork doors depicting four animals: an eagle, a leopard, a lion, and a buck deer, which symbolize the main traits of a devout man. The synagogue, featuring porches, annexes, Aron Kodesh, rich furniture and decorations, went into a decline not long after the passing of its founder and chief benefactor. At present, Popper Synagogue serves as bookshop and also as an art gallery in the women's area upstairs.Wolf Popper, nicknamed as "the stork" for having been able to stand on one leg when lost in deep thought, founded the synagogue in 1620. He financed its construction towards the end of his life. Popper made his fortune in large-scale international trade in cloth and saltpetre (main ingredient in the making of gunpowder), and eventually, became Kazimierz's richest banker with the fortune reaching 200,000 zloty, which made him one of the richest men in Europe.The Popper family lost much of its wealth following Wolf Popper's death in main part due to historical wars, local epidemics, fires, and costly tributes of allegiance. Once grand Synagogue of Wolf Popper never again enjoyed the wealth of its original sponsor who could prevent its slow but unrelenting decline. The rich interior was utterly destroyed by the Nazi Germans during World War II. The Synagogue ceased to function as a house of prayer after the Holocaust. Its arabesque doors were moved to the Wolfson Museum in Jerusalem.

In 1965 the Jewish Council handed over the building to the communist authorities. In the ensuing renovation most traces of its previous religious role were erased and the Old Town Youth Cultural Centre (YCC) was established in its place. At present, the Centre is a vibrant and busy place with long-running programs, educational activities, art studio, and classes in Jewish dance. The YCC Study Workshop on Jewish History and Culture, is an initiative that began in 1995 as the first of its kind in Poland. Art classes are designed to widen the students' knowledge of symbolism and artistic motifs in Jewish art. An annual competition in art and photography is being held there as well as lectures on Jewish Kazimierz, the Holocaust, and series of film showings.