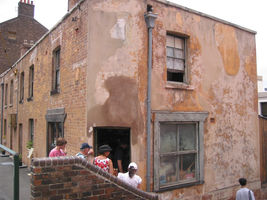 Susannah Place is a heritage-listed former grocery store and workers' cottages and now historic house museum located at 58-64 Gloucester Street in the inner city Sydney suburb of The Rocks in the City of Sydney local government area of New South Wales, Australia. It was built during 1844. It is also known as Susannah Place Museum. The property is owned by Property NSW and managed by Sydney Living Museums, agencies of the Government of New South Wales. It was added to the New South Wales State Heritage Register on 10 December 1999.Susannah Place had domestic occupants until 1990 and the former cottages and store serve as an evolution of Western occupation over 160 years, especially the urban working class community.